In our lab, we utilize the nonlinear spectroscopic technique of Resonant Four- Wave Mixing (RFWM) as a tool to probe molecular dynamics, primarily in gas-phase systems.

The basic principle of RFWM is the generation of coherences in an ensemble of molecules by the application of multiple (3) strong laser fields. These coherences have the unique capability of Bragg-scattering light which in turn creates a signal beam. Our implementation of RFWM exploits the forward-box phase-matching geometry whereby three input beams are directed along three distinct major diagonals of a parallelepiped. Two of these fields would generate a grating (coherence), and the third field would be scattered off this grating, generating a fourth beam. The small crossing angles of the beams (typically 1⁰) ensure a broad overlapping area, which increases the efficiency of the scattering process. The direction of the RFWM signal is constrained by momentum conservation (phase matching condition) and would travel through the remaining (dark) diagonal of the box. Its frequency would be determined by energy conservation, which requires the fourth beam to have the same color as the others. The intensity of the RFWM signal depends, among other factors, on whether or not the energies of the input fields match transitions within the probed system. This resonance condition generates a “background-free” response, which tremendously increases the sensitivity of RFWM. For our experiments, we utilize both one-color RFWM (also known as Degenerate Four-Wave Mxing or DFWM), where all three input beams are of the same energy, as well as its double resonance variant, Two-Color RFWM (TC-RFWM), where one PUMP beam is fixed to a specific transition, while the other two DUMP beams are scanned simultaneously to locate connecting transitions. 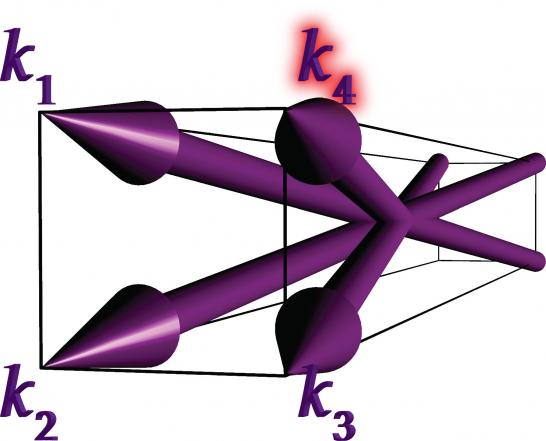 Another advantage of RFWM is that its polarization properties can be exploited to simplify complex spectra in ways that have no analogy to its linear counterparts. In our lab we have developed new polarization schemes that permit the identification of rovibronic features based on their change in total angular momentum (ΔJ) upon excitation. This means that RFWM provides an easy way to selectively suppress and identify P, Q, and R rovibronic bands. This characteristic greatly simplifies the analysis of electronic spectra in large polyatomic systems, where the small inertial constants produce huge numbers of overlapping transitions.

One of the processes that our group has been investigating is the intramolecular proton transfer. This mechanism plays a crucial role in a large number of biological reactions. The model system to investigate this phenomenon is tropolone, where the presence of a sizeable potential barrier impedes classical hydron-migration pathways. Our studies have probed the vibrational and isotopic specificity of the hindered proton transfer reaction taking place within the ground (X1A1) and lowest-lying excited (A1B2) electronic states of tropolone and we have observed marked changes in proton-transfer dynamics upon excitation to the π* ←π state.

This electronic transition cannot be easily explored by traditional spectroscopic techniques, in part because the short lifetime observed in this state (~1 ns), precludes the possibility of spontaneous or induced emission. By applying DFWM to study this state, we have been able to identify a decrease in the proton transfer rate upon excitation. These experimental results suggest an increase in the barrier height for the proton transfer, which has also been predicted in recent ab initio calculations. The DFWM signal dependence on high powers of the transition moments and number density manifests by the suppression of weak transitions and the enhancement of strong transitions. This particular characteristic of DFWM has allowed us to easily identify vibronic progressions in the excited electronic state of tropolone, which were obscured in the linear absorption scan of this transition.